​A HISTORICAL PERSPECTIVE
The right to equal representation for laymen was enacted into law at the seat of the 1948 General Conference of the African Methodist Episcopal Church. The first organization of lay members in Texas, the Tenth Episcopal District, was subsequently held at the site of Bethel A.M.E. Church in San Antonio, Texas (pictured here).  Mrs. Hazel Gomez, wife of Bishop Joseph Gomez, was a great supporter and encourager of the lay movement and was instrumental in the first lay organization.  J. L. Mackey was the first Lay President and Birdie Marshall served as the first female President of the State Lay Organization.  Also pictured here are members of the First Texas Layman’s Organization.

The Legacy of this organization lies with its leadership and members who have toiled and carried it through the years.  The Tenth Episcopal District Lay Organization is proud of its many accomplishments; however, it is most proud of hosting the 29th Biennial Session of the Connectional Lay Organization which was held July 24-29, 2005 in Houston, Texas.

Historiographers:
Shirley R. Harris (1991–1999) Deceased
Pamela Tilley (1999 – 2009)
Mary Shelton (2009 – 2017) Deceased
Dierdre D. Rockeymoore (2017 – 2020)
Phyllis Bergen-Jackson (2020 -     )
Paul Quinn College
​
The Tenth Episcopal District is home to Paul Quinn College, one of the most innovative small college in America.  It is a private, faith-based, four-year, Liberal arts-inspired college that was founded on April 4, 1872 by a group African Methodist Church preachers in Austin, Texas.  The school’s original purpose was to educate freed slaves and their offspring.

Today, Paul Quinn, now located outside of  Dallas, Texas, has become a model for urban higher education by focusing on academic rigor, experiential learning, and entrepreneurship.

Tenth Episcopal District Lay President Dr. Rodrick Moore serves on the General Board of the African Methodist Episcopal Church as the Dean of students.

Lay members Cherry Boggess, Alumna  and William Earls are members of the Paul Quinn College Board of Trustees.

The members of Tenth Episcopal District Lay Organization have supported the renovation
and beautification of the Richard Allen Chapel on the campus of Paul Quinn College. 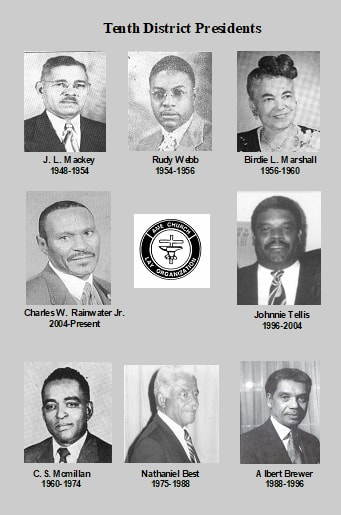